A warm THANK YOU goes to all my buyers and collectors. You are much appreciated! Use Discount Code HBBTAR 25% until July 07 2022 Midnight 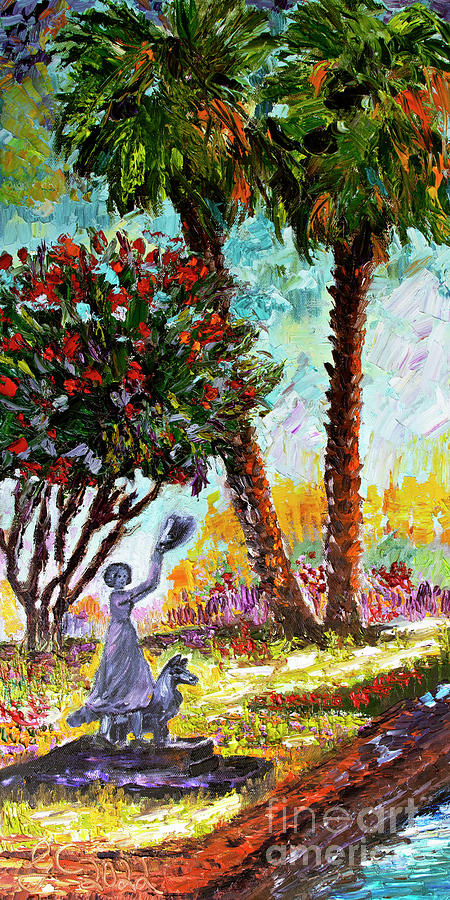 Savannah Georgia famous “Waving Girl” painted in fine oil on canvas. I found the statue of Florence Martus when I visited Savannah a few years back. It wasn’t the first time I came to the city but I never strolled that far on River Street.
That summer I was accompanied by my mother who came from Germany. Savannah was at the top of my list for her to see. After admiring the beautiful statue of “The Waving Girl” I promised myself to learn more about her history and who she was. The statue was created by the renowned Felix de Weldon, stands waving toward the Savannah River in Morrell Park on the historic riverfront.
I decided to paint two versions of “Waving Girl” one depicting the statue and another in which I wanted to bring her alive. Set in the time period when she lived.
The question is: “Why was Florence Martus waving at the ships?” The story I read that I believe is probably true, she waved at the ships in hopes that her lost love, a sailor that went out on a ship, would see her waving when he returns. Some say she waved because she liked to wave at the ships.
From a women’s point of view, I think she waved because of a broken heart. Florence was born on Cockspur Island and later moved in with her brother and lived on Elba island, a small island on the Savannah River close to the Atlantic Ocean where the ships come in through what is called the Tybee Roads.
It is said she waved at the ships for 44 years from 1887 to 1931 she never missed one. I had to ask myself. Why this devotion? How did it start? I think it started with a broken heart. I can see her longing for her love to return. The first time she waved was probably to wave him goodbye. From that day one she waved at every ship at day time with a large white handkerchief and at night with a lantern. I had to paint The Waving Girl with a ship. After all her story ties to the sea and ships. In those days there were no cell phones, no internet and letters could take weeks or months to arrive. Departures and separations from loved one like this had to be traumatic.
As it turns out she was never reunited. I understand that Florence Martus never married which to me is a sign that she never gave up hope to see her love again.
Some people try to dispel this story by arguing she was a child when she began waving, but according to records she was 19, hardly a child. The perfect age to fall hopelessly in love. Florence Martus born August 7, 1868 died February 8, 1943 her waving years were from 1887 to 1931